We all have a finite 24 hours in a day, which we distribute (unevenly) on the works we do, and we have only so much time for social sites or Internet surfing. Seeing the average time spent by users on Facebook, which is in excess of 40 minutes a day, I think, people hardly get time left for other social networks.

Not only that, our habit of unevenly spreading time, also leaves us wanting for more time, which for many could mean cutting back on time spent on the Internet. And as people are more or less addicted to Facebook, time spent on other social sites drops down, which in the long term means, pulling out of these websites.

How they can survive?

Has the recession aftected the way family unit is organized in the Untited States? Is it the recession that forced 1 in every 10 kids live with his or her grandparent (s)? An analysis of the U.S. Census Bureau data done by Pew Research Center suggest that it is so.

It has been found that 41% of children (4 out of every 10) who live with their grandparents are also raised by the grandparents only. In the analyzed period (between 2000 and 2008), the number of grandparents functioning as a prinary caregiver to the American kids has also increased to 2.8 million in 2008 from 2.4 million in 2004, which is an 8% increase. 5% of which has increased between 2007 and 2008. It seems recession definetly has affected the way family unit organize itself in the US. 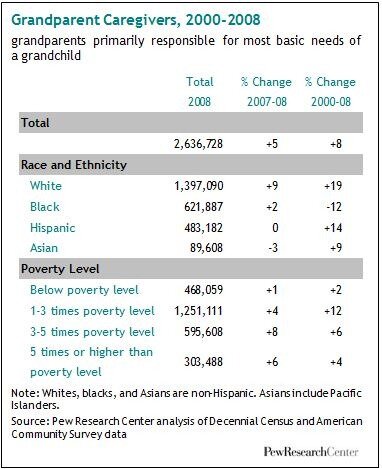