16 Oct 10 Why Mobile is The Hottest Marketing Channel

Everyone is talking about mobile these days — from marketers to coders to users to the shopkeeper round the corner, everyone is talking about mobile. This made me wonder if it indeed is a soaring market or just a fad like gazillion others that preceded this, and I decided to look for some quantifiable data to see why a marketer should consider including mobiles in the marketing mix.

That brought me to a Gadget Ownership, 2010 study conducted by the Pew Research Center’s Internet & American Life Project in this month in the United States. The result tallied with the common belief on the matter.

The study suggested that 85% Americans own a cell phone, and only 59% and 52% owns desktop computers and laptop computers, respectively. Another 4% is said to have access to tablet computers. (See image below). 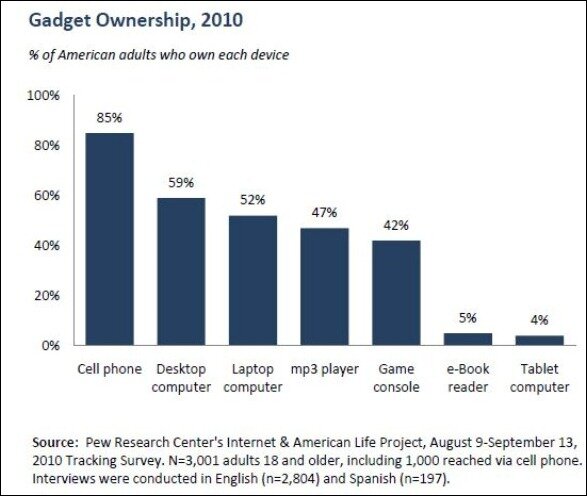 The depth of cell phone penetration has provided a never-before for marketers to reach individual customers. But do not assume that the old rules of the game will be applicable. To become successful here, you may need to rethink the rules of engagement. You should, therefore, make a move fast, before everyone else does.

The growth rates of these two social networking sites have exploded, but MySpace’s shrunk. The user base of MySpace fell short by 7% of its previous years mark. (See image).

Filed in General with 0 Comments

If you thought it is 10MP camera, music player with 4, 8, 16, or 32 gigs of space, or ultramodern, sleek web browsers that is the most used feature of a mobile phone then I cannot tell you how wrong you are because the old-friend texting—sending text message from your mobile phone to other mobile phone(s) — is the most popular mobile phone feature.

The second most used mobile feature was mobile browser, and on the third rung were mobile games. Music featured on 6th place below download apps and social networking. (See image for complete data)