02 May 10 Credit Card Reform Wrong footed the US Consumers

Credit card reform was one of the many steps taken by Pres. Obama to pull the US economy from the ugly jaw of recession that engulfed many innocent families taking away countless many jobs. People were cheerful about it, but now as the promise had been acted upon and the law has been put in place, people are not cheerful. People are confused, angry, and ambivalent about it, as found by the Nielsen Company in a study.

Nielsen BuzzMetrics has done a thorough study to gauge the mood of the consumers, and for that the company sieve through 45,000 Usenet forums, 8,000 discussion forums, and 135 million blogs. According to the Nielsen Company, the main focus was on finding the following:

The study revealed that buzz related to Credit Card Act tipped off big time in May 2009, and it continued making round until it petered out n February 2010, when the law was put into effect. (See image for trend). 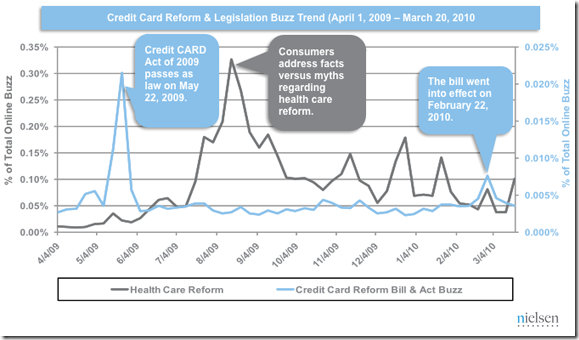 People who went gaga on the announcement of Credit Card Act 2009 started to oppose it when Obama signed the bill to make it a law. People have many complains ranging from having not enough protection to fear of misuse by the company, etc. Only time will tell how justified this fear is, meanwhile see the image below to get the complete data. 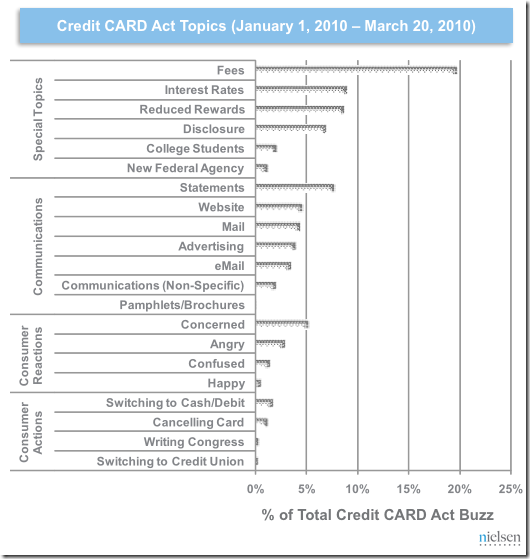